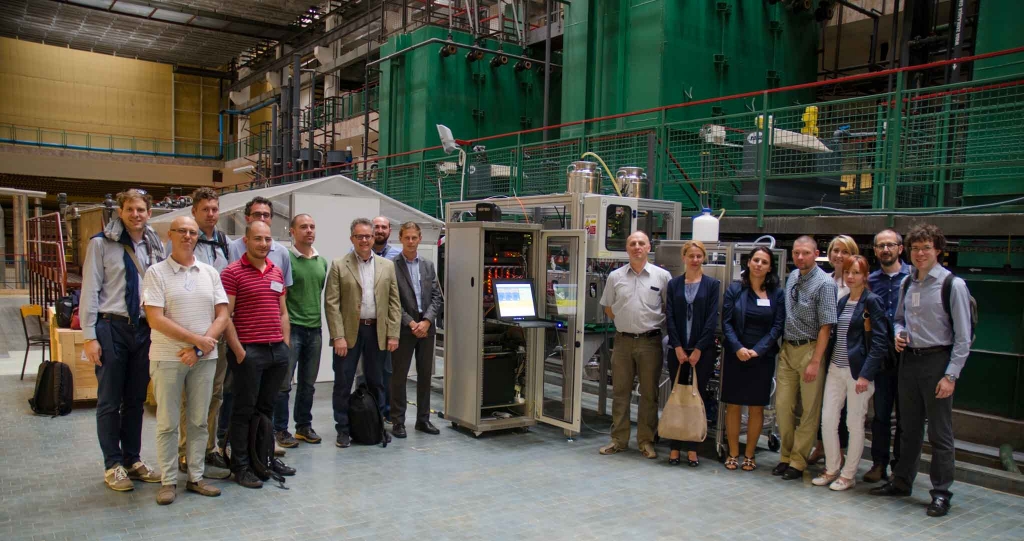 The TAWARA_RTM project aims at developing a complete platform to control the tap water quality with respect to the radioactivity content.
The platform provides a real time measurement of the activity in the water (measuring the gross alpha and beta activities) to verify whether the distributed water is well within the limits set by the EU legislation or if it’s reaching the threshold that requires rapid actions.
In the latter case, a message is sent to the water plant management to inform about the need of stopping the water distribution.
At the same time, a second part of the system is activated to determine the nature of the contamination.
A gamma ray spectrometer is used to identify the nature of the contamination and the corresponding counter-measures.
The determination of the contaminants is also needed in order to establish the effects on the population and produce a full information report for the Civil Security Authorities.

The prototypes of a real time monitoring system and spectroscopy analyzer is designed, built, tested under laboratory condition, and finally installed at the North Waterworks Plant of Warsaw managed by the Warsaw Waterwork Company (Miejskie Przedsiebiorstwo Wodociagow i Kanalizacji w m.st. Warszawie S.A. – MPWIK), for the demonstration campaign.
The site selected for the demonstration is particularly sensible for possible radioactive contamination being in communication with the Chernobyl region through a network of rivers and canals, and due to its proximity with a Polish National Nuclear Waste storage site.
The TAWARA_RTM system is designed taking into account that an increase of water radioactivity might derive from natural phenomena (as earthquakes) but also from a whole set of radioactive and nuclear emergencies.
The TAWARA_RTM project includes the development of a complete platform including the fast real-time monitor system (RTM), the spectroscopic system (SPEC) as well as the Information and Communication System that will be designed to include in the future also chemical and biological sensors.

This website uses technical cookies that are useful during browsing and also third party cookies, in order to provide services in line with your preferences. To learn more or opt out of all or some of these cookies, click on "extensive disclosure". If you accept by clicking on "Accept and continue" you consent to the use of cookies.